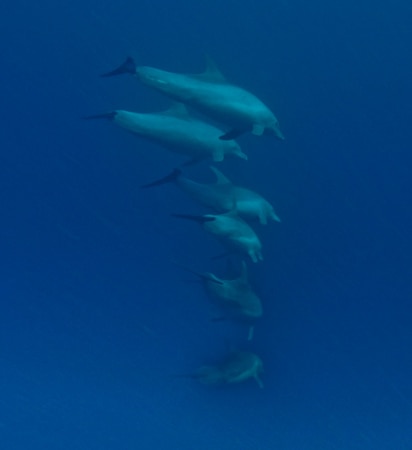 This week in Bunaken… Lots of sightings at the moment showing us that big fish is better! Dive guide Fenly and his group got a real treat this week when they had a 2 m marlin swooping past during a dive at Lekuan III. These impressive game fish are a rare sight for divers as they are pelagic and will leave anyone who sees them in awe.

Earlier in the week a napoleon wrasse the size of a Volkswagen Beetle was seen at Satchiko as well as a couple of beefy reef sharks, barracudas and tunas. Our tec instructor Dom also got his fair share of the big guys when he during a dive on Muka, the dive site right in front of the Two Fish resort, was checked out by a dolphin. (Yes, we know that dolphins aren’t fish, but at least they are pretty big!) Apparently the divers didn’t look too scary cause the dolphin went away and got six of his friends so the group had seven dolphins circling them!

Fun divers Tomas and Carmen from Switzerland visited Bunaken five years ago and were happy to see that not much have changed. Even though Carmen surface from every dive shivering with blue lips (she’s wearing double wetsuits and a hood!) they have been doing four dives/day and been ticking off lots of great sightings such as winged pipefish, ornate ghost pipefish, pygmy seahorse, candy crabs, leaf scorpionfish, wicked decorator crabs during the night dives and much more.

The diving is great at the moment, time to come for a couple of dives!