We have been seeing loads of Blue Ring Octopus recently in Lembeh so we thought we would tell you a bit about them!

Ecology
There are possibly 10 different species of blue-ringed octopus but only 4 have been formally names and all are inhabitants of asian-pacific waters:

They are one of the jewels of the ocean, with vivid blue rings visible over the body when hunting, courting or alarmed. The are only 12 to 20 cm (5 to 8 inches) long but are considered as one of the world’s most venomous marine animals. When the octopus is agitated, the brown patches darken dramatically, and iridescent blue rings or clumps of rings appear and pulsate within the maculae. Typically 50-60 blue rings cover the dorsal and lateral surfaces of the mantle. They hunt small crabs, hermit crabs, and shrimp, and may bite attackers, including humans, if provoked.

Life-cycle
Blue-ringed octopus females lay only one clutch of about 50-100 eggs in their lifetime. The eggs are laid then incubated underneath the female’s arms for approximately six months, and during this process she will not eat.

After the eggs hatch, the female dies, and the young larval octopuses will then feed off of copepods, larval crabs and larval starfish until they are ready to move deeper into the ocean then reaching maturity and will be able to mate by the next year.
Once the larval octopuses grow to be one to two years old they produce eggs and continue the cycle. Like most octopuses, they have a lifespan of approximately 1-2 years 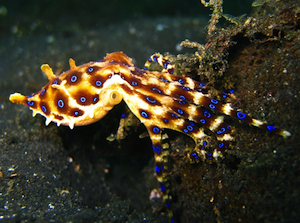 Venom
Despite this small size and relatively docile nature, its venom is powerful enough to kill humans. The venom is a neurotoxin called tetrodotoxin, it is also found in pufferfish and is 10,000 times more toxic than cyanide. The toxin is injected using the octopus’ beak and causes motor paralysis and respiratory arrest within minutes, leading to cardiac arrest due to a lack of oxygen.

It carries enough venom to kill 26 adult humans within minutes. Their bites are tiny and often painless, with many victims not realizing they have been envenomated until respiratory depression and paralysis start to set in.

Symptoms
Respiratory arrest can occur within minutes as the toxin blocks nerve transmission. Other symptoms include vomiting, muscle weakness and paralysis of respiratory muscles. Victims are fully awake until lack of oxygen, from the inability to breathe, leads to unconsciousness.

Treatment
Tetrodotoxin causes severe and often total body paralysis; the victim remains conscious and alert, but this effect is temporary and will fade over a period of hours as the tetrodotoxin is metabolized and excreted by the body.

There is currently no anti-venom available, and victims are frequently saved if artificial respiration is started and maintained before marked cyanosis and hypotension develop. First aid treatment is therefore pressure on the wound and artificial respiration once the paralysis has disabled the victim’s respiratory muscles. Victims who live through the first 24 hours generally go on to make a complete recovery.

It is essential that rescue breathing be continued without pause until the paralysis subsides and the victim regains the ability to breathe on their own. This is a daunting physical prospect for a single individual, but use of a bag valve mask respirator reduces fatigue to sustainable levels until help can arrive.

Definitive hospital treatment involves placing the patient on a medical ventilator until the toxin is neutralized by the body.

It is essential that efforts continue even if the victim appears not to be responding. Tetrodotoxin poisoning can result in the victim being fully aware of their surroundings but unable to breathe. Because of the paralysis that occurs they have no way of signaling for help or any way of indicating distress. Respiratory support, together with reassurance, until medical assistance arrives ensures that the victim will generally recover well.

Avoidance
It may come as a surprise to divers but blue-ringed octopuses are common in very shallow water. As a result, children are probably most at risk as they are attracted to the vivid blue rings displayed by the octopus when threatened: the octopus is small and so is often picked up by inquisitive children. For divers, as always, great care should be taken when touching the reef as, when not threatened, the octopus’ camouflage can be very effective. They are not aggressive and their first form of defence is to flee.