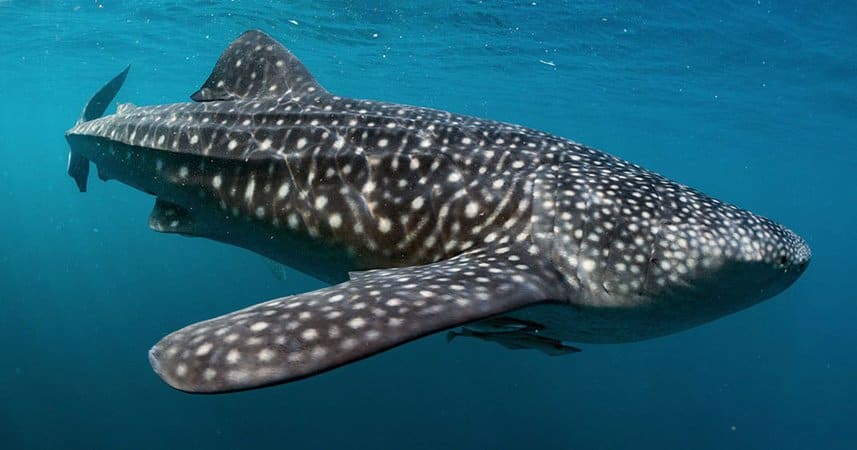 A whaleshark has been spoted on the site of the pyramids in Amed a couples of days ago ! Lucky are Andrew and Jane, two of our guest taking several days of diving with Two Fish Amed, who witness, under the guidance of our divemaster Bayu, a beautifull whaleshark swimming off the coast of Amed. If from time to time whalesharks are reported on the area it’s not that usual that such reports occur.

Three, maybe four times a year… Experienced undermarine photographers Andrew and Jane were the last group to jump in this tuesday and, as taking pictures take time, the slowest as well to progress on the site of the Pyramids. If all the groups this day felt like they had a good dive, everyone on board felt spoilled when they announced on the way back: ” we had a whaleshark !”

First everybody thought it was a joke to tease the fellow divers present onboard but then evidence has been given, the pictures proved they actually saw a three/four meters long whaleshark… Well we really never know when  and what our ocean has to offer !

For this last week we want to congratulate Alejandro and Alexia for completing both Open Water and Advanced Open Water courses during their honey moon in Bali! They left us with a new passion and a whole world to explore, the underwater one!

Otherwise this week in Amed we have an IDC (Instructor Development Course) which just started. Three candidates are under the supervision of our Course director Tin, assisted by IDC Staff Unieng who hopes to soon become one of only a few Indonesian women Course Directors! We wish these guys a lot of fun and succes through this experience !